This is a small cafe on an unloved and unlovely stretch of Oldham Rd in the no-mans land between Manchester city centre and its suburbs. It's in a small parade of shops opposite the Wing Yip/Glamorous/Postal Depot behemoth.  Very conveniently, there is limited parking in on-street bays directly outside.

It looks nothing from the outside and, speeding past in the car, if you even noticed it, you'd probably think it was a takeaway. If you managed a second glance, you might think it was a hairdressers or something. Inside, it's cheap laminate floors and basic, bare tables decorated only with chopsticks and paper napkins, but it's clean and there's a good smell coming from the downstairs kitchen, and, as I enter, the waiter leaps immediately up from the table where he's been chatting.

I'm no expert on Vietnamese food (in fact it's the first time I've had it in over 20 years), but the menu seems to tick most of the boxes I know, with spring rolls, summer rolls, pho, banh xeo, plus a strong line in barbecued meats. Just how authentic it is, I don't know, though I was the only caucasian in the whole time I was there.

The menu is very brief and not without repetition, in that most of the main courses are the starters with rice or noodles added. I rather like that. Both in terms of keeping buying to a minimum and produce fresh (vital in Vietnamese cuisine), and in terms of me always wanting to try at least one more starter.

The food had clean, fresh flavours, but perhaps lacked some of the fragrance I had expected, probably because there weren't the quantity and variety of herbs that I'd associate with Vietnamese cooking. 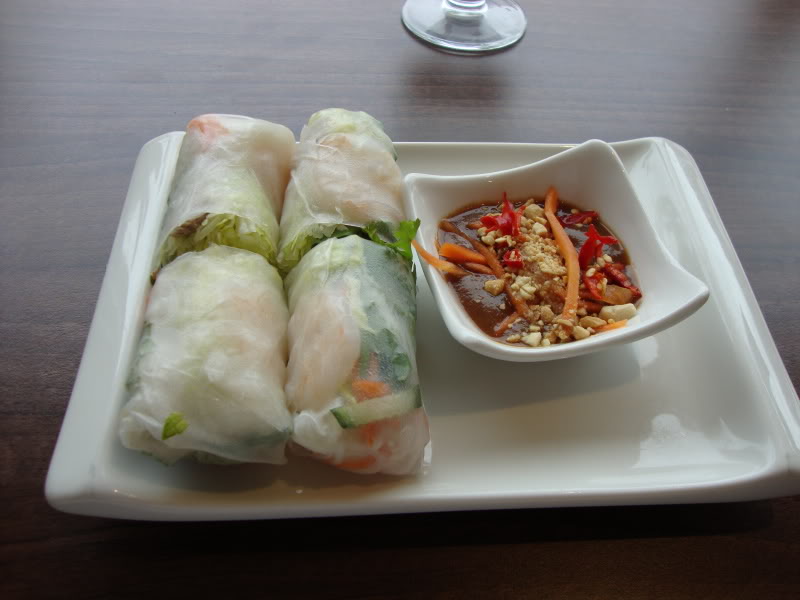 Summer Rolls (Goi Cuon) were filled with rice, prawns, noodles, carrot, cucumber, lettuce and coriander. They were certainly well filled, but the prawn element was a bit sparse, especially when I realised the prawns had been cut in half lengthways.  Unfortunately they seemed to be missing a bit of the zing of flavour that I'd hoped for. But you can't really complain for £3. With the rolls came a dish of very moreish dipping sauce, that seemed to be a sort of combination of satay, fish sauce and chilli. Absolutely delicious, but it seemed out of synch with the summer rolls, which it dominated completely. 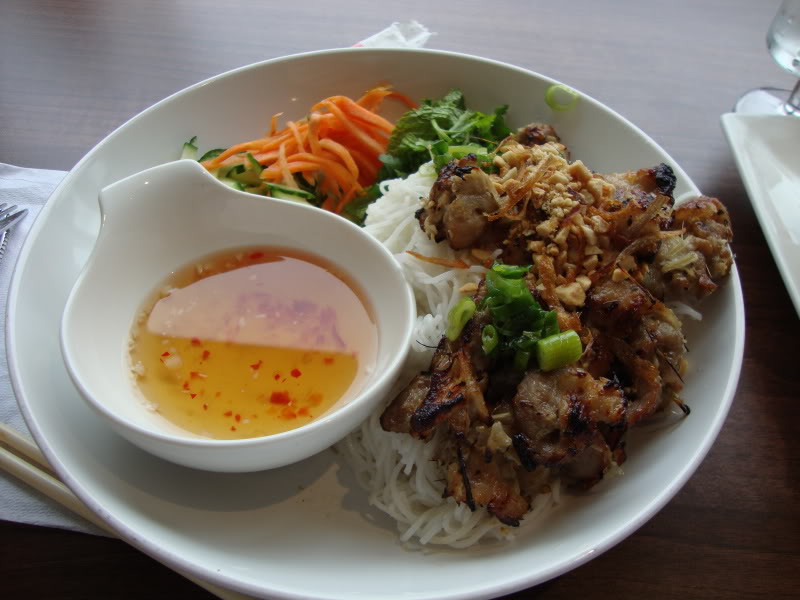 Bun Thit Nu'ong was some slivers of barbecued pork that had a nice level of char without being overcooked, on a mass of thin rice noodles that could have done with someone deciding whether they were meant to be hot or cold, as they were neither. On the side were some cucumber, carrot, spring onion, coriander and mint and fish sauce based dipping sauce.

Banh xeo (no picture: the camera battery died at this point) is described as a savoury pancake. It looks like an overcooked, thin egg yolk omelette, but has no eggs in it and is (I learned) a batter made with rice flour and turmeric that is shallow fried in oil. Here it comes filled with beansprouts, more of the halved prawns and pork, with the same salad and dipping sauce that came with the pork.
One disappointing thing was a clump of mint that still had an almighty chunk on inedible stem attached. Am I expecting too great a level of refinement in a basic caff?

Given the good value of the food (£3 for the the summer rolls, £5.50 each for the other two dishes), a small glass of lemonade for £1 seemed a bit dear! (They're unlicenced.)
Not perfect, but good value for £15. I wouldn't make a special journey (from north Lancashire), but would quite like to go back if I'm in the area.

Back to Andrew Stevenson's web page